An Adult Dancer Pursues Her Passion

My first memories of wanting to dance go back to about the age of 4. I don’t remember specifically how I found about ballet other than from the beautiful picture of a scene from Swan Lake that always hung in our living room. All I know is that I loved to spin. I’m sure I drove my father mad with the spinning to a song called “Hi Ho” as he tried to read his newspaper each night.

I also remember watching Baryshnikov’s Nutcracker every Christmas on TV. I thought that Gelsey Kirkland was the most beautiful thing I had ever seen. I remember asking my mom once or twice if I could have ballet lessons. She told me that only stick-thin girls would be accepted at dance studios. This seems really odd to me now considering that until the age of about 12 I was a pretty normal, healthy, and not overweight child. It’s hard to remember, but I have the pictures to prove it. I was not a rebellious child, and basically I took what my parents said as truth.

I did not continue to bring up the subject of dance after my mom said she did not believe in dancing. In her defence, she was a great mom. I think she just did not understand why I was interested in ballet, and she really knew little about it.

As I became a young adult, I was commuting into the city of Chicago by train every weekday for work. The dance studio in my town was right across the street from the train station, and I would constantly look over to that studio and wish that I could go there. However, the remembrance of mom’s words kept me away.

Fast forward many years to the age of 37. By this time I had long since graduated from college and was working as a computer programmer. I had moved to a rural Illinois town that had a dance studio. Every time I drove through town, I looked at that studio and thought that I should probably go in. Finally one day I said to myself that if I wanted to dance in this lifetime, I needed to get started. So I did! I attended the school’s Nutcracker performance, and then I enrolled at the beginning of the next session.

Since I was an adult, they started me in an intermediate class with the kids. Even though this is a good-sized school, there was not an adult class (for which I will be forever grateful). It was pretty challenging at first. I remember there was this sisonne combination they were doing that I just could not get. What a struggle! I just stuck with it, and during the Summer session I was able to participate in the Summer Dance Camp performance at the studio.

The next December I got to be in the Chinese dance in The Nutcracker on a real stage at a real theatre!I should pause to mention that just like many adults I had put on quite a bit of weight over the years, so I definitely did not look like anyone’s idea of a ballerina. However, I was a fast learner and after about a year was authorized by my studio to start wearing pre-pointe shoes. After another year I was able to get real pointe shoes. After a while I decided to check out some of the other studios in the area as I could tell that I wasn’t getting the best training at the studio where I was. I also started attending the Adult Dance Camps program in Richmond, Virginia, during Summers, and this is where I really understood what was lacking in my training.

I finally discovered a pre-professional ballet school about an hour from my house and started studying there. In pointe class, we were required to do very slow rises for what seemed like a very long period of time. My feet finally rebelled, and I suffered ongoing pain in my left foot that eventually ended my dancing on pointe. I believe it is probably something like a Morton’s neuroma, and it gives pain in the ball of the foot when balancing on demi-pointe or pushing up to pointe.

I stopped dancing for about three years and tried every treatment I could find to solve the problem. Physical therapy, aquatherapy, massage, NET, orthotics, and chiropractic care were tried as well as some other therapies, but nothing really helped. I finally decided to go back to ballet and just dance in soft shoes until such time as I could find a cure, lose weight, and go back onto pointe.

Today I’m back dancing at my original studio one day per week and have still been hoping to find a cure for my foot. I just purchased an inversion table about a week ago, and it really seems to be helping more than anything else has in fixing my foot. I’ve continued working with a chiropractor, and over time we discovered that I’m a few millimeters shorter on the left side. After learning this, I realized that the muscles in my left leg and foot probably became twisted due to the stress of the pointe work. I now use a heel lift, and as I mentioned, the inversion table is helping as I can relax upside-down and let everything rebalance.

The next theatre performance for my studio will be in March. I have the option to dance on pointe in one of the dances I’ve been cast in. I know that thinking I can get back on pointe that fast is very optimistic, but I am much more motivated to do the work to get back on pointe if there is a good reason. Now I have one. I have had the Perfect Pointe book for quite some time, and am now using it to help myself prepare to go back onto pointe. Whether it happens for this show or not, at least now I have hope that with the proper preparation my ballerina dreams of dancing on pointe are not necessarily over.

Incidently, I recently started a ballet T-shirt line, and all that I have learned about ballet over the years has allowed me to accomplish that. I’m also very hopeful of having my own studio one day. I believe that I have a lot to offer students. I’ll just have to see where life takes me from here!

And by the way, that picture of Swan Lake still hangs in my living room to this day to continue to inspire my deep love of ballet every time I look at it. 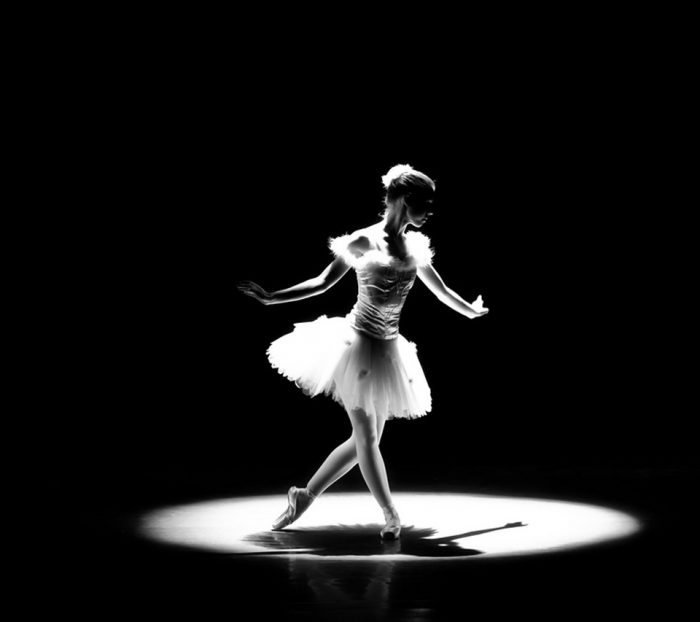